Committee on Whole and Education

I am Valerie Jablow. As a parent of teenage DCPS students who started with DCPS in preK, I would like to connect that experience to this moment as you consider the chancellor nominee:

Hardly any of my kids’ teachers are still left in their elementary and middle schools. Most left because they were treated poorly or refused to teach test prep. We have had at least 10 principals leave in that time. All my kids’ schools have annual budget shortfalls that result in programming uncertainty or cuts. When we parents plead for something for our schools, no matter how basic (i.e., windows that don’t leak), we are told it means another school will go without. I have never heard this zero sum game invoked when a new school is approved or expanded. And when I speak to DC leaders about schools of right as vital civic assets that ensure rights are upheld–not just another choice–I hear silence.

Since I became a DCPS parent in 2005, many of our city’s public schools have been closed[6]. Some neighborhoods now lack any school of right[7]. As charter growth here has no ceiling[8], DCPS has continued to lose school share everywhere except in wealthy areas[9], while our supply of school seats has greatly outstripped our student population[10]. Yet, we have made little progress closing our achievement gap, improving attendance, or involving the public meaningfully in school decision making[11].

Because of all that, here are some questions I would like you to get answers on from this nominee:

These questions are at the heart of the pain I and tens of thousands of other public school parents have experienced for the better part of two decades here. If you, as members of our only statutorily meaningful elected oversight body for public schools, are not willing to ask these questions of this nominee, please let us know why.

[1] This has been articulated loudly and clearly at nearly every hearing held by the council education committee in the last 5 years by my recollection. It was also codified within the boundaries commission report of 2014. See here: https://dme.dc.gov/book/student-assignment-and-school-boundaries-review-process

[2] This too has been articulated loudly and clearly at nearly every hearing held by the council education committee in the last 5 years. To see what it looks like in terms of at risk money, school libraries, teachers, and modernizations (to name just a few documented areas), see the following, respectively: https://chpspo.org/tag/at-risk-funding/ and https://educationdc.net/2018/04/05/inequitable-funding-in-dcps-yes-it-is-as-bad-as-you-feared/; https://educationdc.net/2017/01/31/dcps-school-libraries-the-continuing-saga-of-the-inequitable-and-underfunded/, https://educationdc.net/2018/07/15/how-to-have-effective-teachers-in-every-school-or-what-dc-doesnt-do-but-should/ and https://twitter.com/VJablow/status/1088814384103739399. Regarding inequitable programmatic offerings in DCPS high schools, our new deputy mayor for education had nothing to say when I noted how my high school of right offers 1 foreign language, while one across town offers FIVE. See here: https://twitter.com/VJablow/status/1070009677918994433 Unbelievably, the inequity even goes into snow removal: https://twitter.com/joeweedon/status/1085152922663559173

[4] Melissa Kim at DCPS said as much during the December 4, 2018 meeting of SHAPPE, noting that the writing is on the wall regarding DCPS closures next school year. In addition, on p. 35 of our ESSA plan (see here, it notes that after a few years of low test scores a school is subject to takeover by another operator.

[5] I discuss this toward the end of this blog post here: https://educationdc.net/2019/01/31/talking-transparency-now-with-a-petition/ The relativity of the star rating, along with the fact that the number of 5 star schools is capped, came up at an LSAT meeting at one of my children’s schools. Oddly, for a system based on so-called “market” principles, it would seem that the only incentive involved here is punishment.

[6] Again, thanks to researcher Betsy Wolf for tracking this, since no one in our city government appears to be doing so OR tracking the public money lost when, say, a charter school pours millions of dollars of public money in its privately owned facility, only to close and the facility is then unavailable for public use despite the massive expenditure of those funds. See here: https://twitter.com/betsyjwolf/status/1068622214357020672

[7] Some examples off the top of my head: Woodridge (Taft and Woodridge closures; both are charter schools); Mayfair (River Terrace was closed as a neighborhood school); Eastland Gardens (Kenilworth was closed and was offered to a charter outside the process mandated by DC code); Fort Lincoln (Marshall was closed—which ironically had been the receiving school for when Woodridge was closed). All of these neighborhoods are surrounded by high volume commuter roads, such that getting in and out is not easy for children younger than teens on foot. Moreover, each neighborhood has a fair amount of land and housing devoted to them, such that a critical mass of kids could be available—even if all do not elect to attend their neighborhood school. But when you destroy that network of publicly owned schools—arising out of the symbiotic relationship between the city, peoples’ living patterns, and the need to ensure rights in education in every quarter–then you are precluding rights. It’s not exactly a surprise that the in boundary schools for kids in those areas are not well-attended. Our city has thusly not only precluded the possibility of a school of right in every neighborhood, but also ensured a steady supply of kids to charters that moved in. We have never had a conversation about this as a city—it’s been done by fiat, without the public’s direct consent.

[8] The SRA calls for only 10 new charter schools a year—but there is no ceiling on the expansion of already existing charters. As a result, even a conservative forecast for sector growth, from the recent master facilities plan, calls for DCPS to become a minority school system. See here: https://twitter.com/wperkinsDC/status/1064716723180486656

Gotta ask: are you prepared for the ramifications for DC education rights? Because that 2027 scenario in that link means a whole lot of kids will be forced to give up rights they enjoy now in DCPS.

This is not without consequence: Building extra DCPS capacity in a ward with relatively few resident kids will inevitably mean that outside of Ward 3, the crunch of low enrollment at DCPS schools will accelerate, such that the “trend” in the footnote above (showing essentially the massive shrinking of DCPS) will look quaint.

Curiously, there was no mention of busing Ward 3 kids to other schools such that the diversity of *those* schools is increased.

In the end, the diversity of Ward 3 schools with selected OOBs slots at young ages comes with a price that in Ward 3 presents itself solely as overcrowding–while the price in other wards is continuing severe underenrollment of DCPS neighborhood schools. One can argue this is a chicken/egg thing (those schools were bad or not resourced enough, ergo everyone left who could get to Ward 3), but regardless, the pattern is clear and, from my perspective on the east side of rock creek park, very damaging.

Again, I must ask: are you prepared for the denial of rights that the massive shrinkage of DCPS everywhere but in Ward 3 represents?

It doesn’t have to be this way: the city could do the slow and steady work of provisioning those schools outside Ward 3 adequately such that parents would not feel that they have no choice. Right now, there is nothing in place to ensure that this happens. It’s not rocket science—it’s slow, steady hard work that takes years of effort and commitment.

What are you willing to do?

[10] The 21st Century School Fund in 2017 created one of the most grotesque documentations I have ever seen of this oversupply of school seats here: https://educationdc.files.wordpress.com/2017/10/excess.pdf Even if half of this is disputed, it’s still a large number. Growth of our student population under any forecast shown in our current master facilities plan can almost entirely be accommodated with existing seats.

[11] All of these have been documented exhaustively in council and state board of education hearings, the latter especially regarding how our ESSA plan—with a 70% test weight—doesn’t follow what the public relentlessly said it wanted. The test weight, however, was what DFER wanted—and phone banked its way to. And of course, we know the public had NO input into Bard and Banneker, all the while the plans themselves did not follow the PACE act nor were accounted for in terms of where that money will come from: https://educationdc.net/2018/12/31/failing-high-school-dc-style/

[12] At a recent SHAPPE meeting, on January 22, 2019, the chart below was handed out, which is a handy, if incomplete, look at just how inequitable offerings in our high schools are. Ron Brown, for instance, was founded to provide young African American men opportunities they would not get in other high schools. It has the fewest programs here. I would wager that if Banneker and School Without Walls had been included, the shame encoded on this chart would be much greater. 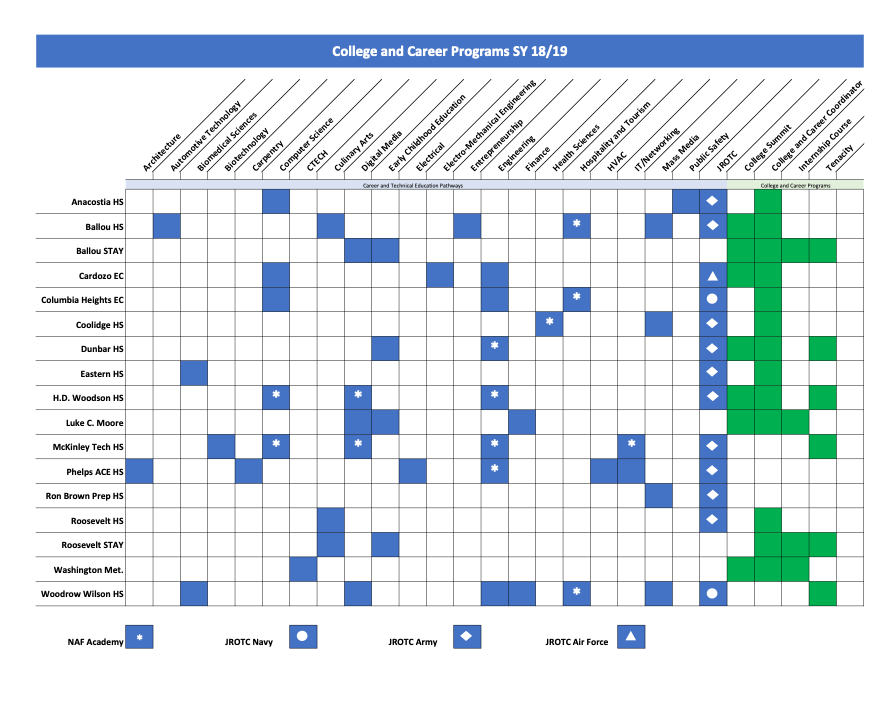 I work at EPA, and have a son and a daughter. I commute just about everywhere by bike. I like to volunteer in my community, and to knit. View more posts